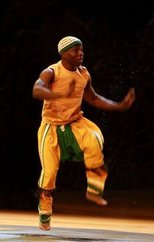 Vozolo Dance Company is a Las Vegas-based professional troupe founded by Master Dancer and Choreographer, Atito Gohi. Atito, born Gouri Bi Gohi Johnson, is originally from Befla, a small village in the West African country of Ivory Coast. His family is Gouro, an ethnic group from Zionoufla.  Atito's father, Gouri Henri, was a African dancer of Zaouli, the traditional mask dance of the Gouro people. His mother, Bertine Gohi, was a singer.  Atito is one of fifteen children; their interests and careers ranging from the arts to law enforcement.

At age fourteen, Atito realized that he had a natural talent and love for African dance. His father, understanding his sons love for the arts, allowed him to pursue African dance full time. It was then that he formed an African dance troupe in Befla that performed throughout the villages.

As Atito became well known, particularly for his skill in dancing Zaouli, word of his ability reached a former dancer of the National Ballet, who encouraged him to audition for her dance company in Yamousoukro, the city of the President. After dancing with this group for three years, he was approached by the manager of the Nayai Club, a major African dance company in Abidjan, the country's capital. While dancing with the Nayai Club, he heard an announcement on the radio for auditions for the Ballet Nationale de C'ote d'Ivoire. He auditioned and joined the ballet shortly thereafter. It was with the National Ballet that Atito came to the United States to perform.

Since relocating to the United States in 1994, Atito continued his career in New York with the Mask Dance Company of the Ivory Coast. He has taught African Dance at Djoniba Dance and Drum Centre, St. Augustine School in the South Bronx, the Atlanta African Dance and Drum Festival and the Florida African Dance Festival. Atito has performed as an African dancer and musician at Disney World, The Guggenheim Museum, The Museum of Natural History, The Studio Museum in Harlem, Brooklyn Academy of Music, HBO, Henry Street Settlement and Summer Stage.

In 2016 Atito moved to Las Vegas, Nevada and has performed at numerous events and venues throughout the Southern Nevada valley as well as Los Angeles, California. He is currently an instructor at the West Las Vegas Arts Center and devotes substantial portions of his time to directing his African drum and dance troupe, the Vozolo Dance Company.

Eric Bli Bi Gore is a musician from Ivory Coast, West Africa. Starting at the impressionable age of six, he showed an unmatched maturity and affinity toward African drumming and tradition in his village—Guezanufla. Over the last twenty plus years, he has performed as a professional African drummer throughout Africa, Asia, South America, Europe and the United States.

Eric is also the founder of his own West African drum and dance company, Zey Blan Ta and is Co-Director of the Vozolo Dance Company.

Papa Diarra Zumana is from the Bobo people of Burkina Faso and is a descendant of a long line of African Griots. Prior to moving to the United States, he was the principal djembe and balafon (AfricanXylophone) player in Ballet Djolem and Lakimado, world renowned Ivory Coast African drum and African dance companies. With both companies, he toured Europe, South America and West Africa and received many awards including the first rank of the competition of dances at the 3rd Francophonie Olympics in Madagascar, Le Prix de le Meilleure Troupe and Le Prix de Festival National de la Creativite.

Since moving to the states in 1999, Papa has enjoyed African drum teaching residencies with Columbia University and the Brooklyn Arts Council. He has also toured and performed with Sogbety and Vado Diomande, Feraba African Rhythm Tap Company, Fatien Ensemble, Hermano Vasquez Mexican Circus, Kotchegna Dance Company, and Gboze Drummers, to name a few. In addition, Papa spent 7 years performing  as an African drummer and musician at Disney World’s Animal Kingdom as well as Universal Orlando Citiwalk. Papa moved to Las Vegas, Nevada in 2014 and is currently performing at private parties and events, teaching, and composing music for a wide variety of African Drum and Dance Ensembles, including Vozolo Dance Company. For more about Papa Diarra Zumana, visit his website at www.papadiarrazumana.com 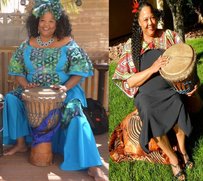 For the last several years, Nicole has also dedicated her studies to world percussion, performing throughout Las Vegas with the city’s top musicians. She has performed at numerous private and corporate events culminating in her recent performance on the Discovery Channel television show, Global Beauty Masters and at Russell Simmons' Diamond Empowerment Fund Gala at the Four Seasons, Las Vegas. In 2016,  Nicole formed her own group, Triba World Percussion Music & Entertainment seeking to combine her business and artistic experiences together.

In 2017 Nicole joined the management team of Vozolo Dance Company where she helps with a wide variety of tasks including but not limited to booking talent, client communications, contract negotiations, billing, web and graphic design, marketing and promotions, video editing, company coordination, transportation, etc. Nicole is also proud to be a drummer and performer with the Vozolo Dance Company.